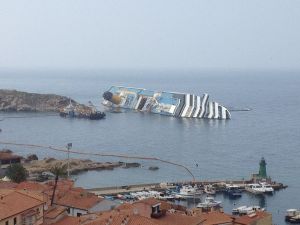 Captain Francesco Schettino has been making headlines for quite some time ever since the ship he was in command in, the Costa Concordia, capsized off the coast of Giglio, Italy on January 13, 2012 and 32 people were killed. Schettino and several crew members were accused of manslaughter for their roles in the tragedy, but no one has taken the brunt of the blame more than Schettino. After all, he did make the last minute call to bring the vessel too close to shore as part of a maritime tradition known as a “salute” – a decision that was not authorized, changed his story several times when accused of abandoning ship (at one point even claiming he “fell” into a lifeboat), and failed to take responsibility for his actions or admit to his role in the accident.

However, Schettino remains the only person that is currently still on trial for the accident. The other crew members, though charged and convicted, had their sentences suspended. Costa Crociere, S.p.A., the owner of the Concordia, walked away with a mere 1 million Euro administrative fee. Now, Schettino remains the only person left to possibly spend any time behind bars for the horrific cruise ship accident. And after making a statement in court earlier this month, it doesn’t appear that proceedings will go in his favor anytime soon.

On December 2, Schettino admitted in court that he was “showing off” when he decided to change the Concordia’s itinerary to perform the salute, leading the ship to crash into a giant rock and causing it to capsize. According to the former captain, the salute is a normal practice and is done in order to impress passengers. In addition, he made the decision to perform the maneuver as a “salute” to a retired colleague who resides in Giglio, as well as the ship’s head waiter, who is from the Italian town.

Ok, performing a salute in and of itself is not a bad thing, but Schettino should have taken greater precaution to ensure the waters near the coast were safe, which many claim he did not. In fact, while Schettino claimed there was no sign of the rock, others claim the reef was, in fact, visible. According to the ship’s first officer, Ciro Ambrosio, Schettino wasn’t wearing his glasses and kept asking him to check the vessel’s radar for any signs of danger. Schettino even admitted he turned off the Concordia’s navigation system and was solely on his sight to steer the ship – without glasses.

One would think that nearly three years after the tragedy occurred Schettino would at least take some responsibility for his actions, yet, the former captain continued to defer blame, going as far as to say (in reference to whether the Concordia was on a safe route or not), “If the crew had any doubt about that, they should have told me.”

Asked why he had asked the coastguard “is there water at 0.3 miles?” Schettino replied: “I was just making conversation.”

Well, it seems as though Schettino will continue to hold the title of “Captain Coward”. I’m sure everyone is anxious to see what the next court appearance has in store for him. At this point, it would probably do him some good to keep quiet, before his seemingly apathetic comments continue to dig him further into the hole he’s already in.