Jacqueline Garcell | LM&W, P.A.
Integrity First, Compassion, and Excellence in All We Do
Skip to content
COVID-19 UPDATE: We Remain Fully Operational. Click here to read a message from our President 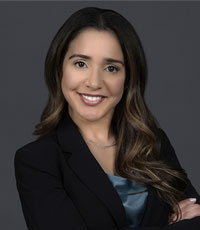 Jacqueline Garcell is a partner and active trial attorney in maritime law for Lipcon, Margulies & Winkleman, P.A. She routinely handles passengers’ personal injury, sexual assault and wrongful death claims, as well as non-maritime personal injury claims. Ms. Garcell is the fastest attorney to ever make partner at the firm, having been promoted to the partner position after being with us for a decade.

Ms. Garcell has helped settle hundreds of cases on behalf of both cruise ship passengers and crew members. She achieved one of the Top 50 Personal Injury Verdicts in Florida in 2017 — this rare and incredibly impressive feat encompasses all personal injury verdicts, not just those in the maritime law field.

Some of her notable wins include:

In working as a maritime lawyer, Ms. Garcell is able to help clients who might otherwise feel as though they have no recourse. She believes that it’s important to be transparent and communicate to the client what strategy is likely to lead to a favorable result.

Ms. Garcell first began her legal career as a paralegal, after graduating from the University of Miami. While attending the Florida International University College of Law, she was hired as a summer associate by our firm in 2010. She subsequently worked as a law clerk until she joined the firm as a licensed attorney in 2013. Finally, in 2019, Ms. Garcell earned her a place as a partner at Lipcon.

In her free time, Ms. Garcell invests a significant amount of time into her work for the Guardian Ad Litem program, where she serves as a critical stakeholder in the foster care program to ensure that at-risk kids don’t fall through the cracks.